The most annoying thing you can ask a vegetarian is â€œyou eat fish donâ€™t you?â€ Firstly, let me point out that vegetarians do not eat fish, the clue is in the name. Secondly, if we ate fish we would be Pescatarians, easy to say. Sadly for us actual vegetarians this term is so seldom used that it doesnâ€™t even come up on my Word Spellcheck.

Its quite simple, carnivores are animals who eat meat only. Omnivores can eat meat and vegetation, and herbivores can not consume meat, only vegetable matter. Vegetarians fall into the middle category as we are capable of eating meat, we just chose not to.

Whether this choice is based on religion, health or because we donâ€™t agree with killing and eating animals, the resulting conclusion is still the same, we are vegetarians and we donâ€™t eat meat or fish. I have met many so called vegetarians who give us a bad name, eating only white meat never red meat, apparently constitutes being a vegetarian. Eating just poultry apparently does too. Avoiding meat at home but eating a Big Mac when out of the house also constitutes being a veggie I am told.

For those of us true to the term vegetarian, being asked at social functions if we eat fish and seafoodÂ  is very grating.Â  The answer is always no. Fish are still living creatures and we have made the choice not to eat them.

Vegans are more extreme and totally eliminate all animals and derivatives from their diets. Avoiding dairy and products containing dairy such as chocolate, which can be very restrictive. It is also not permitted to wear leather if you are a vegan. However it is possible to be healthy on a vegan diet and some of the fittest athletes and body builders have been vegans.

Raw vegans as the name suggests eat only raw vegetables, fruit, nuts seeds and grains. These food types can not be cooked over 40C as the heat is thought to kill the food, reduce nutrients and increase toxicity. Foods are eaten alive and supposedly full of nutrients. Though cooking does deplete the vitamin C and some B vitamins, overall, steaming vegetables releases the nutrients, increases bioavailability and makes food digestible. For example carrots, tomatoes and spinach release more vitamins if cooked slightly than when raw. Deep fat frying and boiling food is obviously not the answer, but a diet containing some raw and some lightly cooked or steamed food is advisable

Fruitarians are even more restricted as they consume fruit, nuts, vegetable and seeds and avoid eating grains, animals and derivatives. Although there is some evidence to show this holistic diet is similar to that of early pre human ancestors, followers typically have low amounts of protein and iron in their diet which can be unhealthy.

Radical fruitarians only eat fruit that has fallen from the tree and not been picked. More restrictive than normal fruitarians this is incredibly antisocial and difficult to maintain, but the least likely to affect the balance of nature. With the population of the world growing steadily, it would be impossible to feed many of the 7 billion people on this diet,

However whether a veggie, a raw or standard vegan, a standard or radical fruitarian, the answer is still the same, we still do not eat fish!

Many of us who are trying to lose body fat still continue to eat fruit. Whilst fruit has large amounts of vitamins and minerals, it also contains high amounts if sugar, some more than others, and so can hamper your fat loss results considerably.

When we eat sugar (sucrose) it is broken down into glucose and fructose which are absorbed into the blood stream, increasing the blood glucose.

At only 4 calories per gram, the sucrose can cause a variety of health issues from dental cavities to obesity, as any extra glucose that the body is unable to utilise is stored in the liver as glycogen and the fructose part is processed by the liver and stored as fat.

Ever since caveman times, humans have snacked on seasonal fruit and berries containing sugar, in small quantities when they could find these foods. In these limited quantities, humans still gained antioxidants and nutrients, as well as gaining energy for their active lifestyles.

When embarking on a fat loss food plan or even when looking to maintain your weight, it is sensible to limit the uptake of sugars including fructose and thus limit fruit to once or twice a day, and preferably with proteins to aid the uptake of protein by the body.

Just looking at the glycaemic index which measures the speed at which glucose is released into the bloodstream, we can see that certain fruits can be very high in sugars, in comparison with vegetables below.

In comparison with vegetables:

Fresh ripe fruit taste sweeter than under ripe fruits due to having a higher level of sucrose which increases during the ripening period.

Hence greener bananas for example, have less sucrose then blacker ripe bananas. This is due to an enzyme called sucrose phosphate which increases during the ripening period, synthesising sucrose in the fruit.

Dried fruit is more concentrated and contains more sucrose per gram than fresh.

Many fruits contain very low levels of sucrose, either having a low sugar content overall or containing more glucose and fructose as individual sugar molecules rather than linked in the disaccharide.

Ideally low GI fibrous fruits such as apples and pears increase satiety and are very beneficial for health. More sugary fruits high in GI such as grapes are good as a treat. Bananas and dried fruits are great after a hard training session with a scoop of unflavoured natural protein shake as they have plenty of sucrose. Cherries and berries are a good way to perk up a bowl of porridge in the morning, and will help the absorption of the protein if eaten with a handful of nuts and seeds. 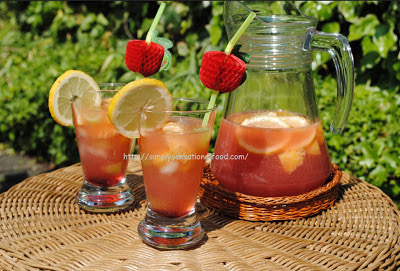 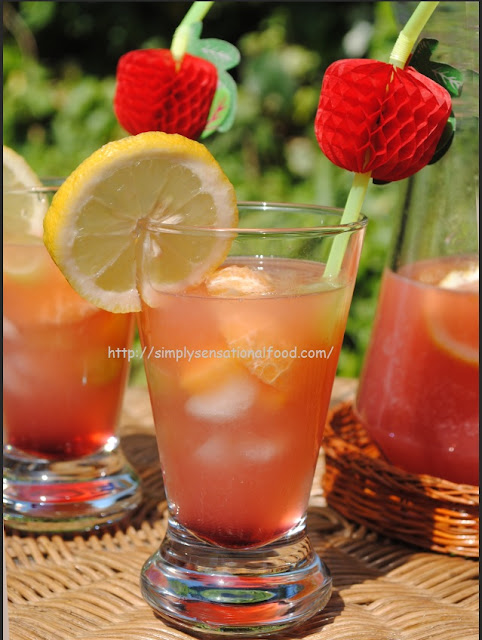 1. In a large jug add all the fruit reserving 4 slices of lemon for garnish.

2. Add to the jug all the juices and the sparkling water.Stir and mix well

3. Take four tall glasses and half fill with ice cubes. Pour the Sangria in each glass making sure there is some fruit in each, garnish with lemon slices. 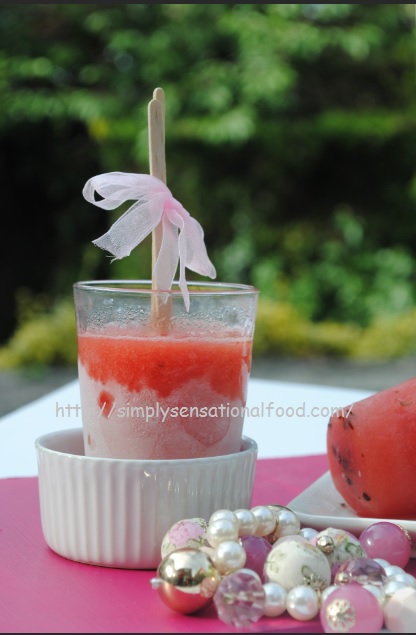 1. Cut the water melon into pieces and remove all the seeds.
2. Place the water melon pieces into a blender jug and add the icing sugar.
3. Blend the water melon to form a smooth pulp.
4. Pour the watermelon pulp into small glasses and push into the centre of each glass a lolly stick.
5. Freeze the pops for 5-6 hours.
6. To serve the pops, remove the pops from the freezer and dip the glass into some warm water, the heat from the warm water will release the pop.