What is it about this celebrity couple which has got everyone talking?Â  Are they playing a game with Big Brother? Are they playing a character for the show?Â  Or is this how they really are with each other?Â  Whatever it is that they are doing it at has got the nation talking.Â  Both Heidi and Spencer have a very interesting relationship.Â  The two of them are completely co-dependent on each other.Â  They are never more than 2 feet apart from each other, they go to the kitchen together, to the sofa together and even to the bathroom (one waits outside while the other one peeâ€™s) and they will always, always agree with the other one.Â  The relationship is like they are two bodies but one thought.Â  It appears to be that the reason that they never argue with each other is because they project their negativity and sensitivity onto the people around them.Â  Instead of disagreeing or arguing with one another they will untie and project the row onto someone else in the house.Â  As I can only imagine is what they do when they are in the â€˜real worldâ€™.Â  I use the term loosely as they are reality start after all.

What does it mean to be that united with your partner, to the extremity that your relationship is possibly unhealthy and obsessive?Â  I believe that it can be very easy at the beginning of a relationship to get wrapped up in each other and forget there is anyone else around you.Â  Wrapped up in your sex, cuddling and take away bubble.Â Â  Where the bedroom has now become your bedroom, kitchen and TV room.Â  This bubble is ok for a few months, maybe a year at a push but then itâ€™s time to start letting the real world back in.Â  With friends you havenâ€™t seen and places you forgot existed because youâ€™ve been so wrapped up in your dream boat bubble.Â  Eventually most people come out of the bubble and join the real world again.

What happens when some people donâ€™t come out of the cocoon they have built for themselves?

When Speidi, I mean Heidi proceeded to explain to the other housemates how much she loved Spencer it was very strange.Â  She was very overtly passionate about it, almost in tears saying he is the air she breathes and the voice in her song and all these other poetic lines she had managed to concoct.Â  Me and my partner where lying on the sofa together watching this, looking in complete bewilderment at each other.Â  Itâ€™s like yeah I love you babe, but not like that, not in a weird obsessive, umbilical cord kind of way.Â  Just in a normal want to share my life with you kind of way.Â  I think that is the different I want my boyfriend to share my life with me, that means share my family and friends.Â  Not BE my family and friends.

When relationships become so intertwined like that, with that kind of co-dependency it fascinates me how one will cope if the other one is not there.Â  If one of them was to leave the other one or one of them dies!

When people become so wrapped up in each other it always fascinates me about what will happen if the other one has had enough.Â  If one of them breaks up with the other on or if someone dies.Â  How would they cope, spending years not making a decision or barely having a thought process of their own I would imagine lead to a major breakdown Charlie Sheen style (minus the 7 gram rocks). 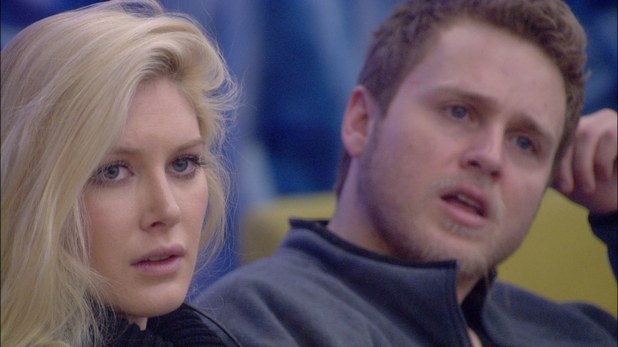 TheÂ flip-sideÂ of this relationship madness is that they are both incredibly in love with each other.Â  If it wasnâ€™t for all the bitching and sniping behind the other housemates backs then Heidi and Spencer could really be a sweet couple.Â  Not a couple Iâ€™d like to hang out with.Â  It would just be a constant battle to make sure we were as in love with each other as they are. Â Reciting Shakes sphere over our special fried rice. Â If there was no one else around they would probably prefer it like that.Â  They had made little effort with the housemates and seemed to like it like that.Â  They have each otherâ€™s backs, most probably even if they secretly donâ€™t agree with each other on things.Â Â  The two of them are happy just in each otherâ€™s company and nobody elseâ€™s.Â  Personally my boyfriend and I wouldnâ€™t last 5 minutes if there was an apocalypse and we were the only remaining survivors.Â  No alcohol, no cigarettes and no Papa Johns.Â  The bubbles burst and yes John Lennon you do need more than love I’m afraid.

Rebecca is a blogger who spends her time writing about dating and relationships. She likes to draw on some of her friends dating faux pas and also writes about past relationship issues and current ones too. Rebecca often uses humour to make light of dating disasters and relationship no goes. She studied Film Studies with Womenâ€™s Studies at Gloucestershire University. Rebecca is an animal print fanatic and loves shoes. She enjoys hip hop, dancing and hanging out with her girlfriends.
View all posts by Rebecca Ripley →
Tagged big brother, reality TV, relationships. Bookmark the permalink.