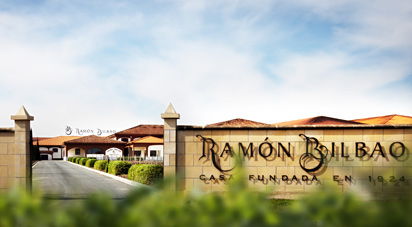 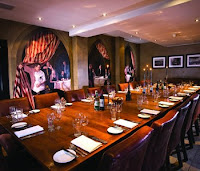 Over canapes in the Hotel’s Library room, Carlos explained that the wine is made by the methode champenoise, but does not aim to be a Champagne copy. Rather, with just a year’s ageing on the lees, it is a mediumweight fruit-driven sparkler with a fine mousse and plenty of varietal citrussy fruit and white flowers.

But there is also a persistence and savouriness that goes beyond mere blossomy spritz, so the closest stylistic comparison is perhaps a young blanc de blancs.

In any event, it has proven very popular – Spanish supermarket chain El Corte Ingles sold out of its allocation in just a few weeks, whilst Head Sommelier of Cambridge Hotel du Vin, Debbie Henriques, was so impressed that she immediately arranged to add it to the hotel’s list.

Our second aperitif was the Albarino Algareiro Rias Baxas 2011; much more weighty and complex than a typical Albarino, the emphasis here was on minerality, salinity and persistence.

On the Atlantic coast of north west Spain, just above Portugal, Rias Baxas is not an easy place to make wine; warm and damp, it provides perfect conditions for rot. To avoid this, the vines are trained on granite trellises around 2m high making pruning and harvesting all the more labour-intensive.

Ramon Bilbao was founded in the 1920s as a family company and is now on its third set of owners, but is still privately held. Owner and boss Rodolfo Bastida is the wine-maker, meaning, according to Carlos, an absolute focus on modernity and quality, rather than on pennies.

The wine that accompanied our starter was a good example of this – a Verdejo Monte Blanco 2012 from Rueda, the grapes are harvested at night and for freshness it is fermented in temperature-controlled stainless steel to preserve the tropical-fruit aromas. 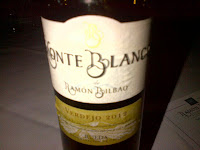 Grown on granite soils, it has a piercing, mouthfilling linear acidity and minerality with a delicately aromatic nose with puy lentils and white flowers that is reminiscent of Austrian Gruener Veltliner.

Hotel chef Jonathan Dean had matched this with pressed pork rillettes with an apple and chicory salad – the fresh acidity of the wine cut through the meat whilst the apple and chicory, lifted with a dash of mustard vinagrette, enhanced the aromatics of the wine.

The main of roast duck breast, cherry chutney and fondant potato was served with two reds from Rioja: the Gran Reserva 2004 Ramon Bilbao Rioja, a youthful purple colour with only a slight paleness around the rim, looks much younger than its almost decade of age.

On the nose there are dried bramble fruits, spice, leather and gaminess; the palate shows good fruit and acidity with sweet thyme.

Alongside this, we tried a 2001 Gran Reserva special vines Ramon Bilbao Rioja; this unfiltered wine, the product of a single vineyard that formed part of the original Ramon Bilbao estate, was also surprisingly youthful in appearance.

In the glass, the colour is purple with only a touch more paleness around the rim – all the more impressive considering it has spent three years in oak. The nose is complex with aromas of dried fruit, game, old leather, mushrooms and sweet herbs.

On the palate, there is a mouthfilling, fresh acidity and flavours of red pepper and rosehip. The finish shows fine-grained tannins and a savoury persistence.

This felt like a much older wine – noticeably more developed than the 2004 – and for me was much the more interesting of the two. Carlos, however, preferred the 2004, which caused me to wonder how the two might develop; on the night, the 2001 was more interesting, but in five, perhaps even ten years, I can see the 2004 showing better. 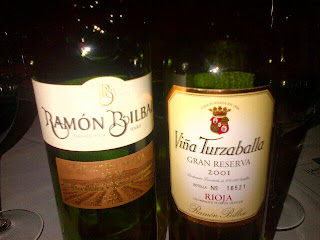 In any event, both wines matched extremely well with the food; the fresh acidity and gaminess were a classic match for duck breast, whilst a touch of spice in the jus and red cabbage accompaniment was extremely well-judged and brought the food and wine into perfect harmony.

The final course was a selection of British and Spanish cheeses served with a biodynamic wine, the Crianza Cruz de Alba 2008.

Biodynamics is something of a wild-haired branch of wine-making that takes organic, low-intervention processes as a base and sprinkles over a generous libation of astrology, pagan earth-worship and downright superstitious oddness.

It is a step-back in time to wine-making as it must have been practised several centuries ago – and the wines often have a vibrant, earthy character as a result.

With none of the advantages of the modern era, low-intervention wine-making also requires high-quality fruit and absolute cleanliness in both the vineyard and the winery.

Whether it is these factors or the cow horn full of dung and phases of the moon that impart a certain quality is something of a moot point.

But for anyone who feels that modern life has become somewhat sterile and soulless, this biodynamic crianza had a vibrancy and texture that spoke of a way of life that is more in touch with nature.

I finished the evening with a trip downstairs to the hotel’s bar with Mike Webb of importers Ellis of Richmond to try a glass of the Crianza edicion limitada.

This is essentially the second wine in years when the top Mierto is not made – in Bordeaux, my rule of thumb for a second wine in a weak year is that you get the elegance but not the structural interest.

The edicion limitada, however, suffered from no lack of structure with lots of fruit and perfectly ripe tannins It is available by the glass at Hotel du Vin and a great place to start in seeing what Ramon Bilbao has to offer.

Either that, or try the world’s first-ever sparkling Rias Baxas.

Tickets for the Ramon Bilbao Dinner at Cambridge Hotel du Vin cost Â£60; I attended as a guest of the hotel.

Wine of the Month - November (And a Wine to Drink Out)
Wines from Turkey, India, Greece and Georgia at Laithwaites

Tom Lewis is a wine writer and educator from Cambridge with a particular interest in Austria and France. His comments have been published on JancisRobinson.com, Local Wine Events, as well as in the local press in his hometown of Cambridge, UK. When it comes to buying wine, Tomâ€™s philosophy is to buy as close as possible to where it comes from. He writes a regular blog, the Cambridge Wine Blogger which launched in 2009 and is a presenter for the Cambridge Food and Wine Society. To read more of Tomâ€™s work, please check out cambridgewineblogger.blogspot.com
View all posts by Tom Lewis →
Tagged restaurant, wine. Bookmark the permalink.