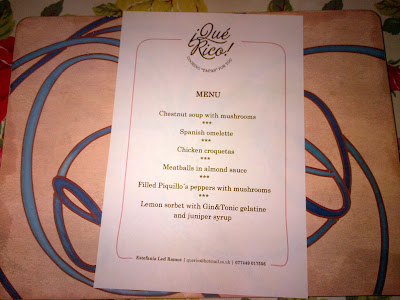 Two years ago, Estefania Led Ramos left Spain and made what she planned to be a temporary move to Cambridge to improve her English.

Deciding she rather liked the city, however, she gave up a career in journalism and communications to set up a catering business, Â¡Que rico! Tapas.

As any foodie worth their manchego will know, tapas areÂ small plates of simple, oftenÂ finger food traditionally served in Andalusian bodegas -Â a little something to snack on with your copita of sherry.

Â¡Que rico! translates as “delicious” and is generally applied to food, but can also be used of people – in the same way that we talk of “yummy mummies”.

The business idea behind Â¡Que rico! Tapas is three-fold:

– cateringÂ for meetings and business lunches

Estefania invited the CWB household to try her at-home service and turned up one evening with a Mary Poppins bag full of goodies and a handful of printed menus. After half an hour in our kitchen, she called up to say that dinner was ready.

I did not have any sherries to hand, butÂ dug out a selection of southern RhÃ´ne wines from the newly-renamed appellation of Grignan-Les-Adhemar to see how they would match.

We started with an appropriately autumnal chestnut soup and mushrooms. 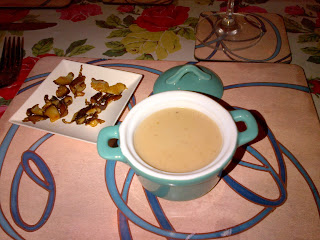 The first time I have had chestnuts in a soup, this was thick, rich and creamy – and disappeared very quickly; the mushrooms (sourced from Cambridge market) were also delicious, adding a contrast of flavour.

Next was a more well-known favorite – Spanish omelette with bread and olive oil. 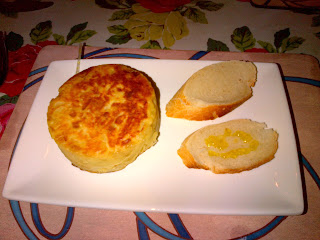 Not so much an omelette in the familiar sense, this was more a potato cake, sweetened with onions, held together with egg and cooked to toasty perfectionÂ on both sides; pure comfort food for autumn.

Chicken croquetas were little pieces of chicken in a sauce, coated with batter and deep fried, reflecting the origins of tapas as often a way to use up left-overs. 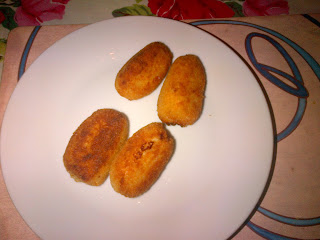 The wine for all the lighter tapas was a Viognier from Domaine de Montine – citrussy and zesty with some sweet spice and floral honey aromas, it stood up well to the rich sweetness of the dishes.

The meatballs in almond sauce was exactly as describedÂ – hand-made, leanÂ meatballs with a sauce made from oloroso sherry and nibbed almonds. 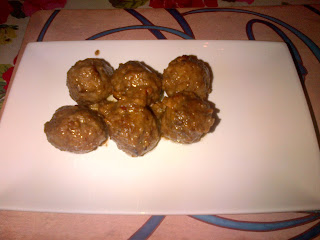 The two reds struggled a little with this dish – it is not quite either white-wine or red-wine food, but would have matched perfectly with a dry oloroso.

Traditional Spanish food is big on meat, but the final savoury course was Piquillo’s peppers stuffed with mushrooms and served with a sour-cream sauceÂ – sweet, concentrated peppers, earthy mushrooms and a creamy sauce.

Estefania explained that the peppers are first roasted over an open fire, then peeled and stuffed with mushrooms held together with a flour-and-milk paste. 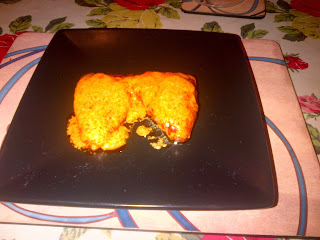 After five generous courses of delicious food, a refreshing lemon sorbet to finsh was the perfect way to end the meal – it came with a gin and tonic gelatine and juniper berries.

To match with this refreshing and slightly bitter dish, I pulled out a bottle of well-chilled Rutherglen Muscat from Stanton and Killeen. I had found the wine a little syrupy and overpowering with mince pies, but well-chilled and faced with the bitterness of the juniper berries, it came into its own. 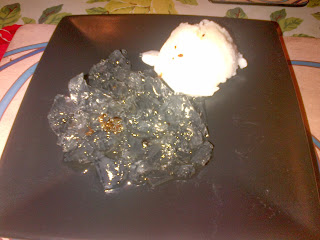 Â¡Que rico! Tapas is the latest in a series of innovative food businesses to set up in Cambridge – as the growth of the Mill Road Winter Fair, Eat Cambridge and Cambridge Food and Wine Society have shown, there is definitely a burgeoning interest in superior food in the city and Â¡Que rico! Tapas deserves to do well.

Estefania’s food was one of the best meals I have had in a long time – the dishes are simple and traditional and do not aspire to the sort of achingly-hip, knowingly-ironic cleverness that you may find inÂ some of Cambridge’s more edgy restaurants.

For there is only so much too-cool-for-school food that I can take;Â a diet of foamed vegetables andÂ trios of deconstructed whatevers may have an initial wow factor, but for me becomes tedious – like a day of back-to-back motivational speakers.

And, after a busy weekend day of various fairs and ferrying children to activities, to be served six courses of simple but perfectly-judged, utterly faultless and deliciousÂ food in the comfort of our own home by an enthusiastic, accomplished (and very child-friendly) chef was a delight. 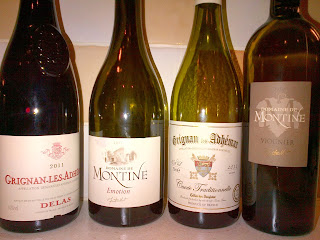 If and when Cambridge gets its first sherry bar, I just hope someone approaches Â¡Que rico! Tapas to provide the food.

Hidalgo Sherry Dinner With Cambridge Wine Merchants at The Punter

The Nourishing Foods of a Christmas Carol
German Rice Pudding

Tom Lewis is a wine writer and educator from Cambridge with a particular interest in Austria and France. His comments have been published on JancisRobinson.com, Local Wine Events, as well as in the local press in his hometown of Cambridge, UK. When it comes to buying wine, Tomâ€™s philosophy is to buy as close as possible to where it comes from. He writes a regular blog, the Cambridge Wine Blogger which launched in 2009 and is a presenter for the Cambridge Food and Wine Society. To read more of Tomâ€™s work, please check out cambridgewineblogger.blogspot.com
View all posts by Tom Lewis →
Tagged catering, food, spain. Bookmark the permalink.