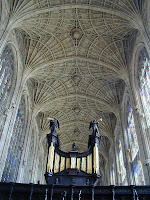 A list of the Top 3 Things To Do on a visit to Cambridge would probably include looking round King’s College chapel, seeing The Backs and going punting.

Having lived in Cambridge for over a decade now, I occasionally find myself becoming rather blase about the city’s charms – before a trip to the historic centre reminds me of why it’s such a wonderful place.

With two small children to occupy, school holidays are often a good excuse to explore with them the historic and more picturesque parts of the city, so this Easter, I accepted an invitation from Lets Go Punting to meet one of the company’s founders, Simon, for a chat whilst he chauffeured the three of us up and down the backs.

Passing the usual row of touts on Bridge Street, we followed the boardwalk on Quayside towards Jesus Green and found our host.

Simon has been working independently as a chauffeur for well over a decade now – having tried a day-job for a few years immediately after graduating and finding it not to his liking – and plies a second trade as a tree surgeon for the off season.

Unlike perhaps most punt chauffeurs, Simon is a local, being actually from Cambridge originally, and did not go to the university here; as a result, the bits of talk he gives us as we wind our way up and down the river focus more on Cambridge as a lived-in city, offering a local’s eye view rather than merely a standardised recitation of the splendours of the university; the river as a trading route with the fens, its course and how the water levels have been managed over time.

It is a sunny but chilly day and so, despite it being the start of the season, the river is quiet. The children ask various questions, eat the snacks we have brought with us and have a go at taking photos (which I think they do rather well). 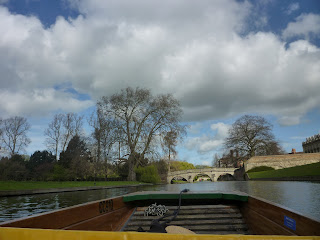 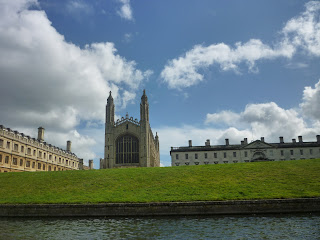 As anyone who has walked by the river on a hot summer’s day will know, there is no shortage of punting touts eager for business, so I ask Simon how Let’s Go Punting plans to tap into the market.

A relatively small start-up, the company’s strategy is to offer something a little different from the usual chauffeured punts for tourists.

Rather, the aim is to go after a more corporate and events-led market with “punting plus”, that is punting plus something else, such as wine-tastings, afternoon teas or hot snacks.

But that’sÂ my pedant’s Old-School approach and the Combined Experience is the very stuff of corporate away-days, significant-birthday parties and the like; wine tasting on a punt is aspirational dynamite and ranks highly for dinner party one-upmanship for the generation that cannot ever merely do one thing at once.

From a business perspective, it’s also a great point of differentiation – there are only a few examples of themed punting events, such as Halloween Punts, so as well as being a talking point, this potentially creating a new category.

The Combined Event also has the potential to be more effective from a marketing perspective as it allows two local companies to market jointly and thus share costs; there is also the potential for the fabled “revenue synergies” or cross-selling; try a wine you like on a punting trip and you are more likely to go back to the merchant to buy more.

And as I wrote in a previous post on branding, events are where it’s at in marketing terms these days with, for example, rock bands making their money from touring rather than album sales.

Back at the quayside, we hop on to dry land, say our thanks and wander down to Jesus Green lock for a quick game of Pooh Sticks, before heading off in search of somewhere that serves mains with chips and ice-cream for lunch.

The d'Arry's Cambridge Case
Treasures at the Fitzwilliam Museum

Tom Lewis is a wine writer and educator from Cambridge with a particular interest in Austria and France. His comments have been published on JancisRobinson.com, Local Wine Events, as well as in the local press in his hometown of Cambridge, UK. When it comes to buying wine, Tomâ€™s philosophy is to buy as close as possible to where it comes from. He writes a regular blog, the Cambridge Wine Blogger which launched in 2009 and is a presenter for the Cambridge Food and Wine Society. To read more of Tomâ€™s work, please check out cambridgewineblogger.blogspot.com
View all posts by Tom Lewis →
Tagged cambridge, punting. Bookmark the permalink.