Learning from cancer research in the hunt for dementia treatments

On the final day of last monthâ€™sÂ Alzheimerâ€™s Association International Conference in Toronto, we heard from Dr Jane Ann Driver, a cancer scientist who moved disciplines and took the leap into dementia research. This experience gave her a valuable perspective on dementia research, allowing her to impart lessons learned in cancer research and to highlight important similarities and differences between the two areas.

On the surface â€“ at least in terms of biology â€“ cancer and dementia couldnâ€™t be more different. While cancer is caused by the uncontrolled growth of cells, dementia is the result of the gradual loss of cells in the brain. However, when we dig a little deeper, we start to see interesting similarities.

Both of these complex conditions are driven by interactions between a personâ€™s genes and lifestyle, with evidence suggesting that many of the things we can do to reduce the risk of dementia are also the same for cancer. We also know that, while neither condition is a normal or inevitable part of growing old, age is the single biggest risk factor for the majority of diseases that cause dementia and for many types of cancer.

During her presentation, Dr Driver described molecular pathways that may have a role to play in both conditions, including inflammation and changes in metabolism, and outlined the potential for leveraging cancer findings to bolster dementia research. In the course of these discussions, she called attention to a particularly significant and arresting difference between the two disease areas. Since 2000, over 100 drugs have been recommended for use in the NHS to treat the different forms of cancer, compared to only four for dementia.

There are several reasons for this startling disparity. The one that Dr Driver was quick to point out is that it is much easier to destroy than it is to create. Cancer treatments are designed to eliminate the cells that cause the disease, whereas treatments to stop diseases like Alzheimerâ€™s in their tracks might require repairing damaged cells or stimulating the growth of new cells to replace the ones that are being lost. Unfortunately, replacing lost brain cells is a big challenge and many dementia researchers are taking a slightly different approach. The conference was packed with the latest research to develop treatments to address the faulty processes that damage brain cells in the first place.

Amyloid and tau are two protein hallmarks of Alzheimerâ€™s disease, and can also play a role in other dementias. These partners in crime build up into sticky clumps in the brain and interact with one another to damage nerve cells in ways that researchers are working hard to fully understand. As amyloid is the first on the scene in the brain in Alzheimerâ€™s, a lot of research focus has fallen on preventing this protein from building up. At AAIC last year we reported on a promising anti-amyloid drug called solanezumab, which is being tested in a clinical trial expected to report results at the end of the year. At this yearâ€™s AAIC, treatments targeting amyloid remained a hot topic and there were presentations, posters and discussions dedicated to this promising area of research. 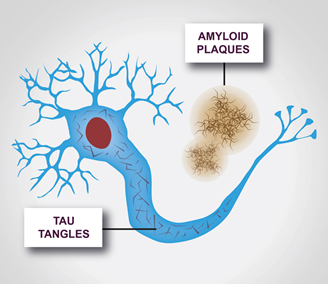 Tau is the other culprit protein in Alzheimerâ€™s, but it hasnâ€™t always attracted as much research attention as the more prominent amyloid. This certainly wasnâ€™t true at this yearâ€™s conference. The very first plenary session (where all attendees gather for one talk) was an update on tau biology by Prof David Holtzman from Washington University Medical School in St Louis, who discussed the potential for new treatments targeting this protein. There was a strong focus on tau throughout the conference and we saw the first results from a final stage clinical trial of a treatment designed to target tau. While this trial was unsuccessful, itâ€™s clear that this protein is squarely in the sights of dementia researchers the world over.

Alzheimerâ€™s is just one cause of dementia and is itself a complex and multi-faceted disease. So, as well as looking at amyloid and tau, researchers at the conference were exploring a range of other ways to help people fight dementia; from targeting the immune system and metabolism, to focusing on brain training and exercise. Tackling the disease on multiple fronts provides the greatest chance that an effective new treatment will be in the hands of the people who need it as soon as possible.

Of course cancer research has considerable complexities of its own, so what has helped researchers to overcome these as they develop more and better treatments?

It was clear from the conference that dementia researchers lack neither the ideas nor the passion needed to drive progress towards new treatments. A 2015 report from RAND Europe looked at how dementia research could emulate successes seen in cancer and other diseases, stressing the importance of factors such as a commitment to tackling the science, strong support across society, a flexible regulatory environment, and a coordinated and strategic approach. Historically, dementia research has also been underfunded compared cancer and while the picture is improving, cancer charities are still able to invest over Â£380m a year into pioneering research, compared with only Â£17m for dementia charities. Thatâ€™s why weâ€™re working so hard to raise more vital funds to power research.

Fundamentally, both cancer and dementia are the result of physical process that take place in the body and brain. With long-term investment over the next 20 years, we can replicate the kind of successes that are changing the outlook for people with cancer.

Youâ€™re already helping us to support a range of ambitious initiatives to deliver new treatments as soon as possible. If youâ€™d like to learn more about taking part in research and sign-up to take part, visit Join Dementia Research or call our Dementia Research Infoline on 0300 111 5 111.