Every now and then I see something that blows my mind. Remember those first proper images of Pluto?Â The ones that make you feel tiny and insignificant â€“ they blew my mind. In that case it was the almost incomprehensible scale of the thing that was the culprit. In my latest cerebral explosion, it was something of quite a different scale that was to blame.

Iâ€™m a bit of a frustrated scientist/engineer really, so an invitation from AXA Insuranceâ€™s charity partner Alzheimerâ€™s Research UK to visit one of the labs they support was never one I was going to turn down.

The lab in question is run by Professor Rick Livesey. Now, this guyâ€™s no normal academic â€“ heâ€™s a dementia science celebrity. It was only after speaking to Vicky Naylor at Alzheimerâ€™s Research UK, who manages our partnership with the charity, and then Francesca Nicholls (another scientist I met during the charityâ€™s Race the Tide fundraising challenge) that I realised how big a deal this guyâ€™s work is. The words â€œgod of growing neurons in a labâ€ have been uttered; I kid you not. This work, funded by Alzheimerâ€™s Research UK, is at the cutting edge of research into understanding how dementia works.

So, get this. Rick and his team of annoyingly talented scientists are growing human brain cells, or neurons, in dishes. Yeah â€“ you read it right â€“ brain cells in dishes. There are hundreds of dishes of neurons being â€˜fedâ€™ and incubated 24/7 by some of these obscenely dedicated scientists.

The way this is done is incredible too. Skin biopsies are taken from people with Alzheimerâ€™s disease and those skin cells are treated to form stem cells (the miracle cells youâ€™re always hearing about on the news). Stem cells have the capacity to form any type of cell within the body. These guys encourage the stem cells to form neurons (I donâ€™t know how â€“ they just do!). 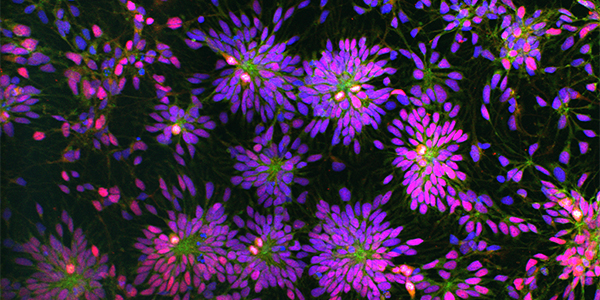 Now, if you remember anything about biology at school, youâ€™ll know that your brain works through tiny electrical impulses in the brain. These impulses are caused by neurons â€˜firingâ€™ between each other. These impulses control everything about how our minds work. The scientists here are testing different things on those neurons to better understand how the brains of people with Alzheimerâ€™s work. And while in the lab, I was shown scans and even video of neurons responding to different stimuli â€“ itâ€™s amazing stuff to see. Only the advanced imaging equipment theyâ€™ve been able to buy make this kind of thing possible. They showed a massive scanner which can scan upwards of 150 dishes of neurons in about 40 minutes. That would take a scientist a couple of days to get through, so you can see how access to cutting-edge technology is helping the cause by allowing these guys to process much larger amounts of data than ever before.

I wondered if Rick ever wakes up and wonders how he came to be growing neurons in dishes, or if it ever becomes â€˜normalâ€™. Oh â€“ I almost forgot; Prof Sir John Gurdon â€“ whom the Institute is named after â€“ works upstairs and was a pioneer of this work, winning a Nobel prize for it in 2012. It was throw-away mentions of Nobel prizes and growing neurons that made this an extraordinary day. With these cells available, they are â€œasking questions of Alzheimerâ€™s diseaseâ€ â€“ thatâ€™s science shorthand for running experiments on the neurons â€“ to see how Alzheimerâ€™s behaves and how those neurons react to different things. This is about understanding the disease and those things that might help us find treatments and ultimately a cure.

ARUK has a rather nifty little diagram that shows whatâ€™s going on, much better than Iâ€™ve managed above: 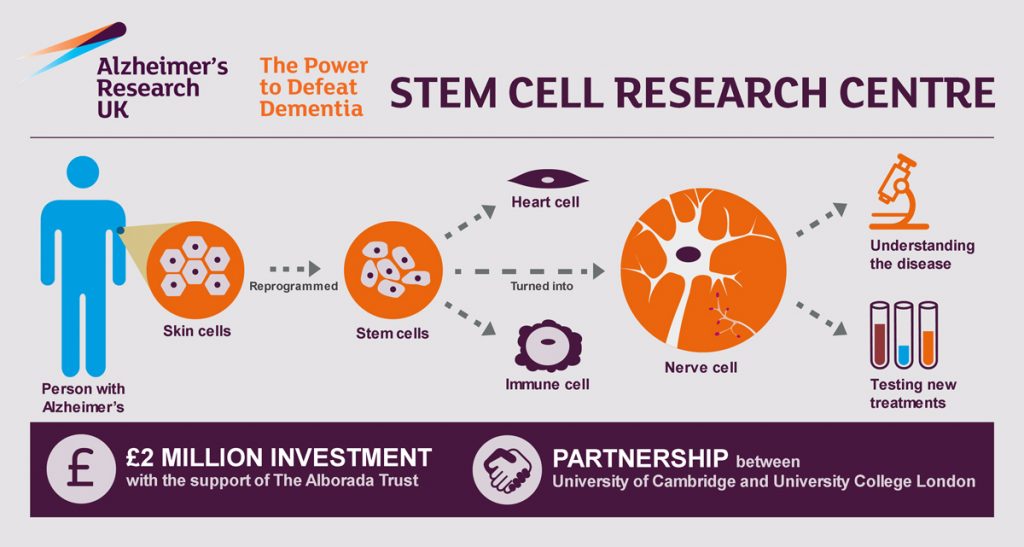 By Rickâ€™s own admission â€“ and he can be brutally honest about this â€“ we still have a long way to go to truly understand how dementia works. Now that might sound a bit bleak, but bear with me. We hear bit and pieces in the press and on the telly about the latest findings. But they are that â€“ bits and pieces that hint at relationships â€“ things that might help further down the line when we know more, or the risk factors that might increase the likelihood of someone developing dementia. But his point is that we need to make progress at understanding whatâ€™s actually going on in the brains of people with dementia. Thatâ€™ll be the key to treatment and cure.

While these incredibly intelligent and driven scientists might not know how dementia works yet, not one of them is questioning whether or not we will ever know. There is an incredible optimism that if we keep throwing science at the problem, and asking the right questions, we will break it. And thatâ€™s what theyâ€™re doing 24 hours a day, seven days a week.

That should be incredibly heartening for all of us â€“ Iâ€™ve seen how valuable the money AXA Insurance raises is in keeping this absolutely cutting-edge research going. One day, it will uncover key information that powers treatment and a cure â€“ no question.