Five minutes of amazing: my journey through dementia

Chris Graham was diagnosed with early-onset Alzheimerâ€™s in 2010, aged just 34. Below is an extract from his newly released book detailing his mammoth 16,000-mile cycle ride around NorthÂ America and Canada raising Â£40,000 for Alzheimerâ€™s Research UK. â€˜Five Minutes of Amazingâ€™ was written with writer Wendy Holden.

It was past ten oâ€™clock at night and I hadnâ€™t a Scooby-Doo where I was. After a tough twelve-hour day in the saddle, cycling more than 130 miles through rain, wind and sleet, I was tired, soaked through and miserable. A strong headwind had been against me all day and my bum was in bits.

My throat was parched and I longed to stop somewhere and prime the kettle for a cup of tea â€“ my only vice.

My problem was that Iâ€™d cocked up big time. The campsite Vicky had suggested I aim for that night was twenty-five miles behind me after Iâ€™d decidedÂ that I could push myself further that day and wing it. â€œI want to keep going,â€ I told her when she rang to find out why I was still on the road so late atÂ night. â€œMy legs feel all right and Iâ€™ve had something to eat. Thereâ€™s bound to be another campsite somewhere up ahead, right?â€

As it turned out there was nowhere else for several hundred miles, a fact of my ride that would become a frequent ordeal. I would have no choiceÂ but to wild camp by the side of the road in the dark despite the risk of bears, wolves and snakes. 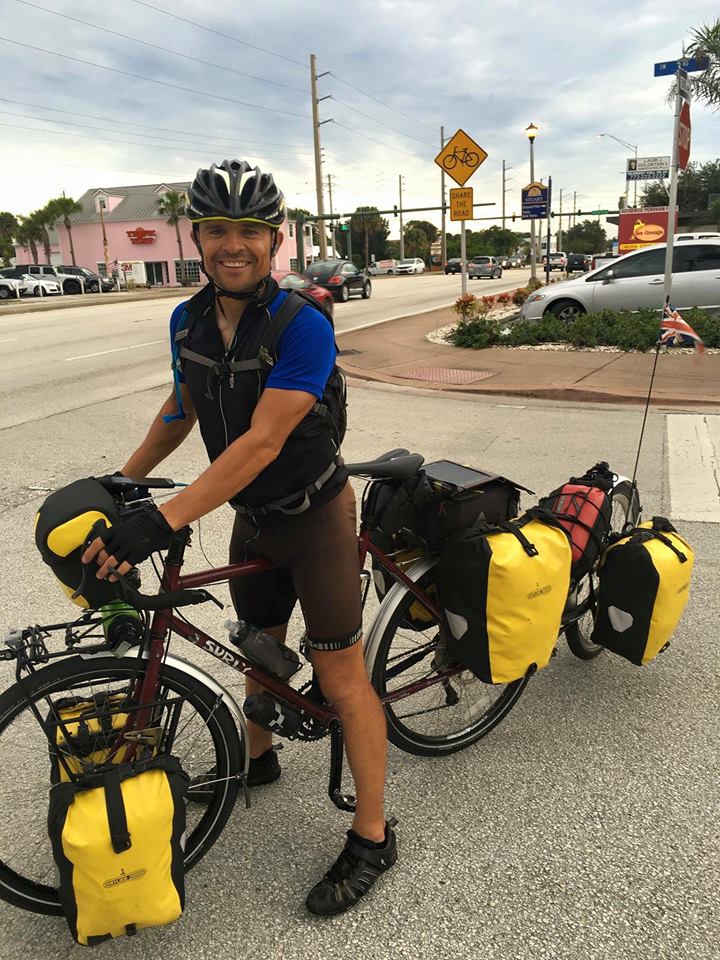 Iâ€™d thought this cycling lark would be easy. Sitting on my arse all day â€“ I mean, how hard could it be? But in taking on this endurance challenge Iâ€™d dubbed â€˜My Dementia Adventure: The Long Cycle Roundâ€™, Iâ€™d swapped 23 years of soldiering for foul weather, winds whipping my face, and cruelly deceptive hills. Armed with a sturdy bike, a sense of humour, and some good old-fashioned British grit, Iâ€™d spent my days dodging dangerous wildlife and avoiding near misses with the giant metal monsters that ruled the roads.

Whenever the sun came out Iâ€™d be sweating like a moose on heat. Then sudden rains would drench me â€“ something I thought Iâ€™d be used to coming from Manchester â€“ but cycling when youâ€™re wet leads to some pretty unpleasant chafing, I can tell you. Not to mention saddle soreness.

Come back, Army life. All is forgiven.

â€œI should have planned better,â€ I complained to â€˜Shirleyâ€™, my American-manufactured Surly bike, and the only one still listening. â€œI should have done what Vicks said and checked ahead. She warned me not to try to go it alone. Better still, I should never have bloody decided to cycle around the whole of North America on my own in the first place!â€

I thought of Vicky, nearly 4,000 miles away back home near RAF Brize Norton in Oxfordshire. I knew sheâ€™d be worrying where on earth I was heading now as she followed my signals on the satellite tracker. In between working as a part-time gardener, care worker, and studying for a photography diploma, she had our new born baby Dexter and her 11-year-old daughter Katy to care for. Our house was full of packing boxes from our recent move and she often had to stay up until three or four in the morning to be my unofficial â€˜Mission Controlâ€™ at base camp. God love her. 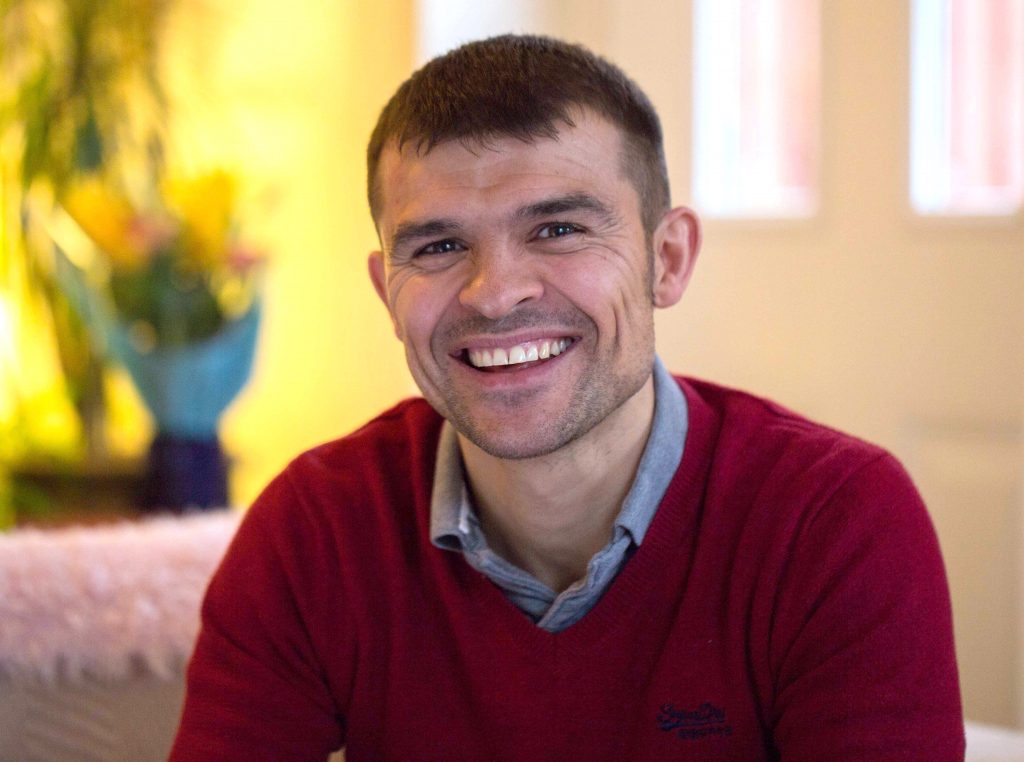 From the moment I set eyes on Vicks, I knew we were meant to be together. After a fractured childhood, four years in a childrenâ€™s home andÂ two broken marriages, at 38-years-old I needed some stability in my life. I just hadnâ€™t factored in all the other stuff that happened so soon after we met. Neither had Vicky. Incredibly, when she learned she was accidentally pregnant with Dexter and 24 hours later we were informed of the true severity of the sentence hanging over me, she barely flinched.

â€œIâ€™ve probably only got a few good years left,â€ I reminded her, still reeling from the diagnosis. â€œThe doctors think I could be dead in seven.â€

â€œSo?â€ she said stoically. â€œIâ€™d rather have five minutes of amazing than a lifetime of never having met you.â€ And with that one declaration she refused to give up on me â€“ or our unborn child.

Then, when I told her that I wanted to go ahead with my long-planned bike ride while I was still able, raising money for Alzheimerâ€™s Research UK along the way, her reply was unequivocal. 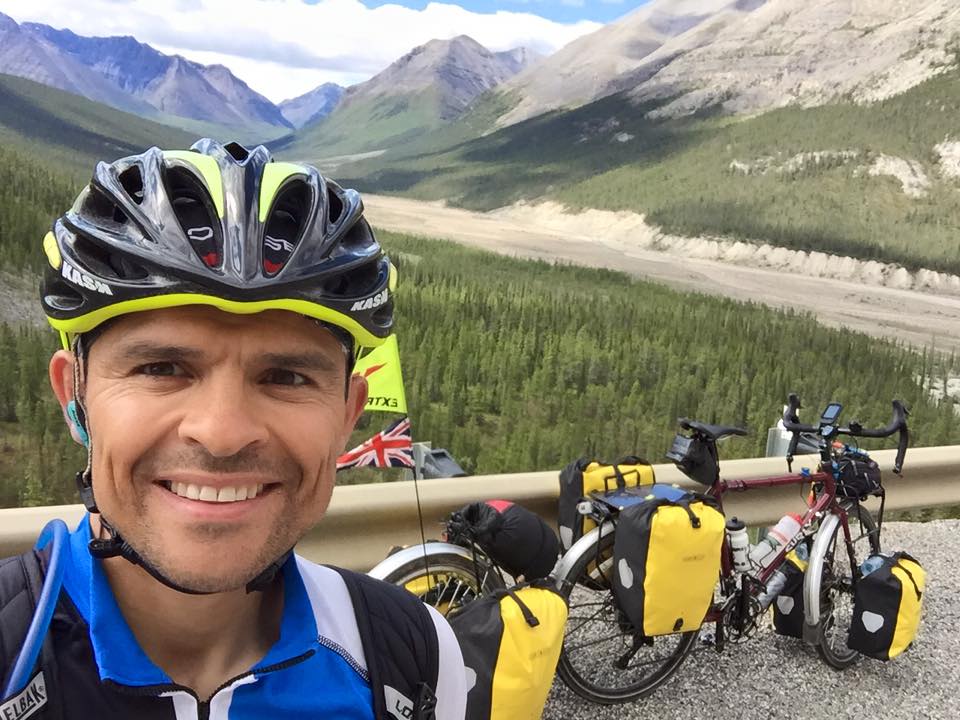 Never one to shy away from a challenge, I wonâ€™t let a little thing like early-onset Alzheimerâ€™s get in my way. Every mile I notched up on my tracker was a mile closer to home, and to her. Iâ€™d been on the road since 4am and my left knee was niggling, but it wasnâ€™t a showstopper and I hoped it would square itself away in time. Yes, Iâ€™d been far too cavalier and made a stupid error â€“ due in part to my general confusion and increasing memory lapses â€“ but, hey, that was life.

I had to stop thinking. Thinkingâ€™s dangerous with me. It was time to forge on and find somewhere for Shirley, my trailer and me. Then Iâ€™d pitch my one-man tent, put some calories and my supplements inside me, and try to get some zeds. Thereâ€™d be no secure campsite with electric fencing for me that night, no Wi-Fi via which to check in with Vicks. 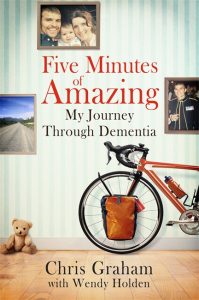 I only hoped I wouldnâ€™t get eaten alive. Not that Iâ€™d make much of a meal. The regulation SA80 rifle Iâ€™d carried as an Army commando for most of myÂ militaryÂ career had been replaced with bear deterrents including bangers and spray.

The instructions on the can didnâ€™t exactly instilÂ confidence:

â€˜Use to deter an aggressive or charging bear. The recommended minimum distance between user and bear should be 25 feet. Using the spray improperly can have undesirable effectsâ€¦ and may actually attract bears.â€™

â€˜Five Minutes of Amazing: My Journey Through Dementiaâ€™ by Chris Graham with Wendy Holden is published by Sphere (RRP Â£18.99) and can be bought on Amazon here.