Families and Friends Dinner at Fitzbillies 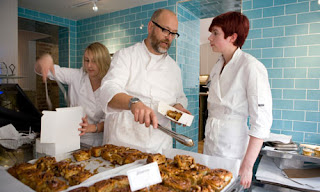 Last week, I took the family to a revived Cambridge establishment, Fitzbillies, for dinner.

We had been invited by Old Persean Alison Wright, half of the husband-and-wife team who, on reading of the demise of the the famous source of Chelsea buns via a Stephen Fry tweet, decided to give up their metropolitan careers in journalism and marketing services respectively and re-launch a Cambridge legend, but on a more businesslike footing with a restaurant as well as the cake shop.

The deal from Alison and husband Tim Hayward was this:Â pay only for the drinks, food is on the house, as long as we give feedback and tip the waiting staff appropriately.

We had planned to get there at a child-friendly time of before 7pm, but a combination of various train problems on my commute back from London meant that it was closer to 8pm before we eventually arrived, feeling somewhat flustered and hungry.

However, the welcome from Alison was warm and friendly, immediately putting us at ease as we were shown to a table at the far end of the restaurant near the kitchen and brought menus.

Starting with drinks, the children ordered lemonade in raspberry and straight versions and tucked into some delicious slices of hearty home-made bread with generous portions of butter.

There is no children’s menu and all the dishes have a least one ingredient that might prove unfamiliar or challenging to younger palates; however,Â #2 child announced he would have the duck to start with, whilst number #1, who was a little cold, opted for a bowl of ham broth, with Mrs CWB also opting for the duck leaving me to try the smoked salmon, but in the end we all tried a bit of everything. 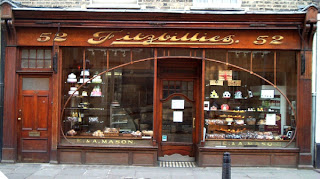 The duck plateÂ came with both smoked and cured duck breast as well as some cooked duck meat – in what was perhaps to set the tone for the evening a little, the duck breast was extremely tasty and very generous; slicing to a third or a quarter of the thickness would have resulted in no less flavour and a touch more elegance. The accompanying picked prunes were also delicious (even if the children turned their noses up) but the thyme croute (a piece of fried bread) didn’t really add anything.

#2 child’s clear ham broth with sherry, chopped egg and mint and ham popovers was a more elegant affair, full of flavour and withÂ the touch of mint adding a delicious and unusual touch.

We had ordered wines by the glass from a small-ish but perfectly formed and well-thought outÂ list – with around 10 reds and 10 whites and two fizzes, of whichÂ three reds,Â three whites andÂ one fizz are served by the glass.

I fear Pinot Grigio could become to this generation what German Riesling and sherry turned into forÂ my parents’ – a once-popular classic wine that then falls out of favour due to over-popularity and too many poor-quality examples. However, my Italian Pinot Grigio from Bacaro was lovely – well-made, with good rounded acidity and mouthfeel and a restrained versatility – and matched well with the salmon.

Mrs CWB chose a Grand Bateau Rouge Bordeaux which proved to be an equally good match with her duck plateÂ – with low tannins, aromas of bramble fruit and hints of savouriness and soy, it was clearly Merlot-dominated and had a similarly smooth and mouthfilling texture as my wine.

For mains, both child #1 and Mrs CWB had opted for a game-based steam pudding, whilst #2 child had lamb and I opted for braised guinea fowl.

The steamed pudding was perfectly cooked and delicious and came with the autumnal wonderfulness of a braised red cabbage and chestnut accompaniment.

Young Man’s lamb chump was served as several delicious medium rare strips with a pink centre,Â aÂ Jansson’s temptation (similar to a potato gratin, -Â very nice) and lamb’s lettuce – aside from the obvious play on words, the lamb’s lettuce worked well as a lighter foil to the hearty meat and potato dish, but the addition of a sharp, wine-unfriendly vinagrette dressing was perhaps a step too far.

My guineafowl was also perfectly cooked and came with a slightly unusual celeriac mash and a sweet, slow-roasted chicory. The earlier Pinot Grigio would have matched well with this, but I was keen to try something else off the wine list, so I opted for aÂ Mahi Sauvignon Blanc from Marlborough, New Zealand with the waiter helpfully offering me a sample to see how it would go.

Unlike so many Marlborough Sauvignons, this was was not overly tropical, lushÂ and fruit-driven, but balanced and elegant with a rounded, mouthfilling acidity that is very food-friendly. 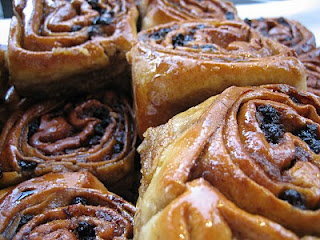 By this point, we had little room left for desserts (which did not include the famous Chelsea buns, pictured above), so decided to share two between the four of us – the pink grapefruit and pomegranate jelly had a pleasing, refreshingÂ bitterness that worked very well and reminded me a little of the Italian tradition of ending a generous meal with a reviving lemon sorbet with Prosecco; it also came with dollop of clotted cream and a shortbread biscuit which proved more popular with #1 child.

#2 child and I shared a chocolate and clementine cake with creme fraiche which was just about perfect – beautifully cooked and very well-made (and also very popular with #1 child).

Â A few days after the dinner, I emailed Alison with our outline feedback and thoughts:

– decor / atmosphere; overall very good, but a bit chilly and spartan where we were sat at the back

Fitzbillies is now open for restaurant bookings on Friday and Saturday evenings; the full price of a three-course meal is around Â£30 per head; table wines cost from Â£16 – Â£35 per bottle, or around Â£4 – Â£7 by the glass.

We paid Â£30 for our drinks plus a Â£10 tip for the excellent service. 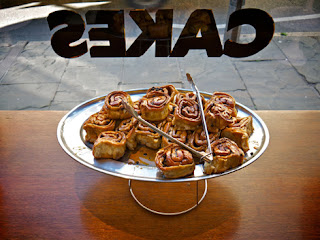 Tom Lewis is a wine writer and educator from Cambridge with a particular interest in Austria and France. His comments have been published on JancisRobinson.com, Local Wine Events, as well as in the local press in his hometown of Cambridge, UK. When it comes to buying wine, Tomâ€™s philosophy is to buy as close as possible to where it comes from. He writes a regular blog, the Cambridge Wine Blogger which launched in 2009 and is a presenter for the Cambridge Food and Wine Society. To read more of Tomâ€™s work, please check out cambridgewineblogger.blogspot.com
View all posts by Tom Lewis →
Tagged cambridge, restaurant. Bookmark the permalink.