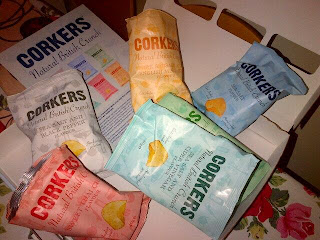 The press pack for these Corkers Crisps tells me they are made from a unique variety of potato (Naturalo, apparently), are sliced thinner for a better texture, are made locally and sustainably in Cambridgeshire, are served on BA, at Kew Gardens and The British Library, have been on television and even travelled to space.

That’s quite a series of achievements for a company that is only 4 years old and was dreamt up on a ski lift.

Founded in 2009 by friends Ross Taylor and Rod Garnham, the entire business is based at the Taylor family farm just outside Cambridge, meaning that everything is done in one place, so visitors can dig their own spud and see it made into crisps in under an hour.

All of this would be for nought, however, if the crisps were not any good. But they are actually some of the best I’ve ever had.

Where mass-market branded crisps tend to be greasy, overly salted and rather harsh, these feel like they have been made with real attention to detail; not at all greasy, with good, well-balanced flavours, they are very good crisps.

The CWB children were naturally keen to help out with a tasting so we opened up all six packets and got to work.

The quality of all varieties was uniformly high and choices for best crisp really just came down to personal preference.

The more ambitious flavours of Sweet Thai Chili, Red Leicester and Caramelised Onion plus Pork Sausage and English Mustard I found a bit less convincing overall and rather sweeter, but from equally well-made base materials.

Corkers Crisps 40g bags are priced around 75p each.

Tom Lewis is a wine writer and educator from Cambridge with a particular interest in Austria and France. His comments have been published on JancisRobinson.com, Local Wine Events, as well as in the local press in his hometown of Cambridge, UK. When it comes to buying wine, Tomâ€™s philosophy is to buy as close as possible to where it comes from. He writes a regular blog, the Cambridge Wine Blogger which launched in 2009 and is a presenter for the Cambridge Food and Wine Society. To read more of Tomâ€™s work, please check out cambridgewineblogger.blogspot.com
View all posts by Tom Lewis →
Tagged crisps, food, snacks. Bookmark the permalink.