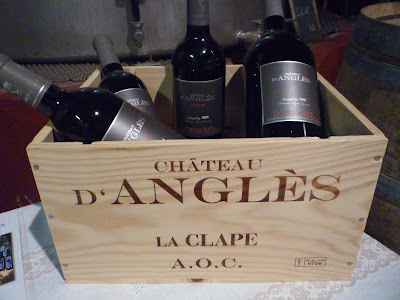 Earlier this year, the CWB family spent a week in the gite of Chateau d’Angles as guests of owners Eric and Christine Fabre.

La Clape is a rocky hill covered in low scrub, known as garrigue – and forest lying between Narbonne and the Mediterranean in France’s Languedoc region.

Where Provence, further round the coast, is dusty and lavender scented, La Clape is greener and home to colourful songbirds, bats, hares and even wild boar. 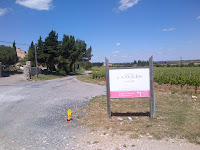 La Clape’s history dates back to Roman times, when it was an island, until a programme of draining the marshes joined it up to the mainland.

These days it is a protected natural park and retains an unspoilt character, nestling between the buzzy, developed sea-fronts of St Pierre and Valras.

Eric Fabre moved to the region around ten years ago from Bordeaux where he was wine-maker at first-growth estate Lafite-Rothschild.

After almost a year of searching, he found a long, low farmhouse at the foot of the hill, just back from the sea and overlooking two vineyards – La Riviere Haut and La Riviere Bas – whose names recall the ancient river which once flowed here and result in two very different terroirs for winemaking.

The vineyard just below the farmhouse is mainly rocks washed down the hill of La Clape where old bush vines produce the concentrated, mineral whites that go into the Grand Vin Blanc. A row of almond trees marks a border with the next vineyard which is made of pebbly alluvial soils where Syrah, Grenache and Mourvedre grow to make ripe gamey reds.

Chateau d’Angles produces five wines of all colours – an entry-level classique white, fermented in vats, whilst the Grand Vin adds some aging in oak for more texture; a red-berry rose with fresh acidity; a classique red and the Grand Vin rouge.

With the winery just a few metres from the vineyards, early-morning picking ensures freshness whilst the hillside location allows for gravity-based settling preserving flavour.

Whilst the red grapes are the familiar Languedoc GSM, the whites are more unusual – a mix of Bourboulenc, Roussane and Marsanne which are all more at home in the Rhone, as well as Grenache Gris.

The white have aromas of beeswax, sweet spice and honeysuckle – the reds have ripe bramble fruit, pepperiness and very fine, perfectly ripe tannins; both wines are big and warming.

After a tour of the vineyards and the winery, including samples from vat and barrel, we had lunch with winemaker Eric, wife Christine and local ex-pat PR, Louise Hurren.

Christine had prepared a starter of parma ham with cherry tomatoes and pine nuts which Eric matched with a 2001 white, his first vintage, which showed incredible freshness and just the merest hints of aged character. 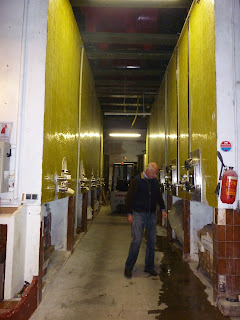 The main of guinea fowl was matched to a 2005 red which, again, felt like it was only just ready for drinking and surely has many more years’ life in it. 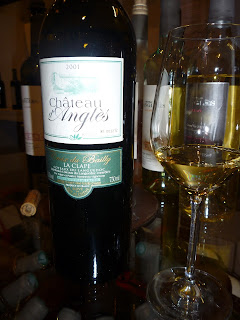 Chateau d’Angles wines are available from Ocado and Wine Rack at Â£12 for the classiques and Â£20 for the Grands Vins.