Recently, I presented a collection of Italian wines at La Dante in Cambridge.

Giulia Portuese-Williams, who runs La Dante, had asked me if I could select and present some wines from different parts of Italy – and with a budget of around Â£10 per bottle, I decided that “affordable” was the way to go.

Whilst it is generally possible to find wines from the world’s “classic” regions below Â£10, at this price point, the less-reputed regions can often outperform; and the classic regions of Italy – Chianti, Barolo and so on – are never bargain wines. 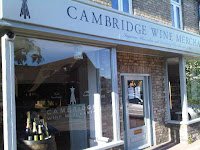 However, many parts of Italy, especially the south, are re-inventing themselves as Europe’s New World of well-made, fruit driven wines at under a tenner, so with the help of Cambridge Wine‘s Mill Road branch Manager, Matt Boucher I selected six of the best.

La Dante in Cambridge is part of the international la SocietÃ  Dante Alighieri, founded in 1889 with 440 offices worldwide – it is a national cultural institute rather like the British Council or the Goethe Institute, but unlike these it is not state-funded and so needs to rely on language lessons for its income.

So my audience that evening was mainly local Italians and Italophile language students plus friends, lending the proceedings a much more sociable and collegiate atmosphere, which suited me fine as it had been a busy weekend in the CWB household and I had not managed to prepare a huge amount to say on each of the wines.

Making a virtue out of necessity then, I simply introduced each wine with a quick overview of region, grape variety and key characteristsics and then started pouring.

We began with a wine I have reviewed earlier this year, as I had used it as an ingredient in a jelly recipe by Alex Rushmer, chef at The Hole in The Wall.

Fermented in tank rather than bottle, Prosecco is much cheaper to produce than Champagne and also has more primary fruit than Champagne, which proved very popular on the evening; this La Delfina Special Cuvee Prosecco is light and elegant with ripe pear fruit. It will never challenge a good Champagne for complexity, but it is well-made, very enjoyable and much more cheaply priced.

The first still white, a Garganega from Veneto, was crisp and appley on first opening with ripe pineapple fruit but with some air became richer, weightier and more mouthfilling.

A versatile food wine, it would match with light starters, salmon or white fish in a creamy sauce.

We finished the whites with a Fiano from Sicily, increasingly a source of well-made, good vale wines; darker and waxier in the glass, this wine had half a degree more alcohol and felt fuller on the palate, showing tropical fruit and herbal, vegetal aromas.

More weighty than the Garganga, this would stand up to cream-based pasta dishes.

The first of the reds, a Sangiovese from Toscana, was a Chianti lookalike on a budget, with typical cherry fruit, prominent linear acidity and good grip, but was also a little more easy-drinking and less challenging than a Chianti.

This is very much a food wine and would match well with beef-based dishes.

Nero d’Avola is one of Sicily’s “signature” red grapes and produces wines with lots of plum, prune and peppery aromas; this wine is made partially with ripasso grapes (i.e. that have been dried on straw mats int he sun for several months to concentrate flavours). This gives the wine an intense perfume and a mid-palate fruit sweetness that proved very popular on the evening and led many people to say it was their wine of the night.

With so many flavours and aromas, this to me is a less versatile wine, but would match well with a game casserole with the sweetness of root vegetables or braised red cabbage. 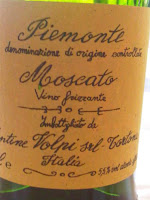 Wanting to finish with a dessert wine, I picked this unusual semi-sparkling, semi-sweet, low alcohol (just 5.5%) Moscato from Volpi which had been my wine match for the jelly I mentioned earlier.

Light and elegant, it shows lots of elderflower aromas and, perhaps because of this, can seem sweeter than it really is (the finish is relatively dry); the acidity is nicely balanced and it is a very easy drinker.

It would make a very pleasant end to a meal, or would match with light, fruit-based desserts – or the layered strawberry jelly if you feel like making it.

Beyond the social aspect and general interest of presenting the wines, the evening proved instructive in a couple of ways – firstly with a mixed Italian and UK-Italophile audience it gace me the chance to see how these two different nations think about wine.

I have long felt that people who grow up with a “wine culture”, where it is part of everyday life (in places like France, Italy and Spain for example), seem to have a more instinctive understanding of what makes a good wine – unlike Anglo-Saxons for whom wine appreciation is something relatively new, they generally do not have the extensive vocabulary for describing wine, but rather simply seem to know whether a wine is good or not.

By contrast, the Brits have both a greater interest in the stories around the wine and also – in a general audience of so-called average consumers – a greater preference for primary, up-front fruit in a wine, rather than more elusive secondary, or tertiary aromas; this was especially noticeable in the preference for Prosecco over Champagne and also the popularity of the very fruit-driven Nero d’Avola.

All the wines here were very good and all proved popular with the audience – however, for me the most interesting was also the most typically Italian was the Poggio Del Sasso Sangiovese.

Fitzbillies, Punting and a Perfect Day Out In Cambridge
Food & Wine Matching at The Punter, Cambridge