A Cup of Coffee in Vienna

For me, Vienna is synonymous with many things – the seat of the Habsburgs, the Holy Roman Empire, historic palaces and grand cathedrals, the waltzes of Strauss and clandestine assignations between cold-war spies and their spymasters.

So, it’s hard to pick one thing that sums up the city – and that diversity and wealth of heritage is one of the reasons I love it so much.

One of the things I also loved when I lived there was sitting in coffee house, making a small cup of coffee last several hours, if I was in the mood, without ever feeling like I was being encouraged to move on.

In 1683, Vienna lay on the edge of civilised Christendom (some locals believe it still does); the Ottoman armies had lain siege to the Austrian capital and were only defeated when the combined forces of King Jan Sobieski of Poland and Duke Charles of Lorraine came to help.

Amongst the silk tents and banners left behind by the retreating Turks (who would take another 200 years to leave Europe) were sacks of mysterious brown beans.

Eschewing the other, more obvious plunder, one of the Austrian spies, a Polish-Ukrainian namedÂ Franz George Kolschitzky, took the beans and opened Austria’s first coffee shop – mixing the thick, dark Turkish brew known as “Kahve” with milk and thus inventing the melange (ask for a cappuccino in Vienna and it will come with whipped cream on top).

The culture of the coffee house later received a boost from an unlikely source – namely, Emperor Franz Josef’s eating habits; a bluff military man, he was a picky eater. However, as custom dictated that not only the sovereign be served first but also that everyone else stop as soon as he put down his knife and fork, this left many an attendee going hungry at what should have been a grand banquet and relying on a visit to the coffee house afterwards for sustenance.

Vienna’s coffee houses have a rich tradition, then, of supporting courtiers, poets, musicians and even the odd exiled revolutionary, but when I lived in Vienna, my favourite coffee house was always the shabby but unhurried faded glamour of Cafe Hawelka – its Slavic name both indicative and typical of the mass immigration from the vassal states which Vienna experienced. 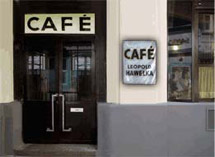 Situated just off the main pedestrianised street, the Graben, Hawelka epitomises gemÃ¼tlichkeit – Austrian gentrified, down-at-heel cosiness; all the furniture has a reassuring romantic faded-glamour and a well-worn shabbiness to it and the welcome is as warm as any in Vienna.

One of the things we noticed living in Vienna was how low rents were compared to London. This is due to low land values, in turn as a result of a closed socialist economy.

It is these low overheads which allow a cafe in the centre of the city to welcome visitors for a coffee costing just a few Euros and not encourage them to leave the minute they have finished.

What I also like about Hawelka is how genuine it feels – in some cities it would have been turned into a quasi-tourist attraction, with a queue to get in, high prices and t-shirts plus other assorted souvenirs available for purchase as you exit through the gift shop.

That said, the Austrians are not too shabby when it comes to marketing themselves and there is a range of Hawelka merchandise available from coffee (obviously) to posters and playing cards.

In other cafes, you would feel the need or at least the obligation to move on as soon as you have finished, but here an atmosphere of relaxed, calm lounging pervades, in which it feels rude to move on too quickly.

This love of la dolce vita in a Germanic country confirmed my suspicions that the Austrians must be the missing link between the Germans and the Italians.

Yes, they like to lounge and they have a propensity for petty politics and scandal, but they can also make the trams run on time and keep the street clean.

It’s one of the reasons Austria is such a special place for me and why, for me, coffee is one of the things that symbolises Vienna above all.

As the Hawelka website puts it: while the Glory Years may have passed, it is the outside world that has changed and not the CafÃ© Hawelka. It still provides a refuge for many artists, writers and musicians.

Common River: Connecting Communities
How to Break Up with Your Barista

Tom Lewis is a wine writer and educator from Cambridge with a particular interest in Austria and France. His comments have been published on JancisRobinson.com, Local Wine Events, as well as in the local press in his hometown of Cambridge, UK. When it comes to buying wine, Tomâ€™s philosophy is to buy as close as possible to where it comes from. He writes a regular blog, the Cambridge Wine Blogger which launched in 2009 and is a presenter for the Cambridge Food and Wine Society. To read more of Tomâ€™s work, please check out cambridgewineblogger.blogspot.com
View all posts by Tom Lewis →
Tagged austria, coffee. Bookmark the permalink.