How far would you go to raise money for a good cause?

Joss is in the middle of an epic challenge to raise money for Alzheimerâ€™s Research UK. In March, he set off on the grueling eight-month journey. He aims to cycle to every sovereign state in continental Europe and then climb to the highest
point of each â€“ either by bike or on foot. 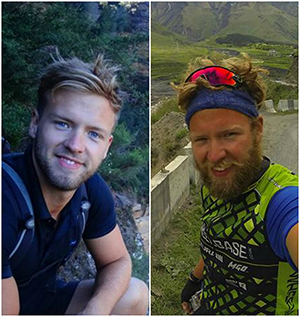 Joss at the start of his trip and now.

This means 42 countries and an incredible 13,500 miles of cycling.

Joss is over halfway through his challenge, has visited more than 20 countries so far and has already climbed the highest point in Europe, Mount Elbrus in Russiaâ€™s Caucasus Mountains.

He started in Portugal and made his way east through Southern Europe towards Russia. He then exited Russia through the Baltics, before flying back to the UK to be part of a friendâ€™s wedding! A few days later, heâ€™s back out to Finland to take on Scandinavia, followed by central Europe and ending in the Netherlands.

Not all plain sailing

JossÂ spends most nights camping but has also been treated to some generous hospitality from locals. We managed to catch up with him during his brief home visit to find out how heâ€™s doingâ€¦

â€œIâ€™m absolutely loving it!â€ he told us. â€œI really enjoy being out on the road. I love the simple life â€“ pitching camp wherever I am and then waking up in the peacefulness of the countryside. Iâ€™ve covered a lot of distance â€“ Russia took up a month in itself! But Iâ€™m on-track with my timing and should finish near the beginning of winter.â€ 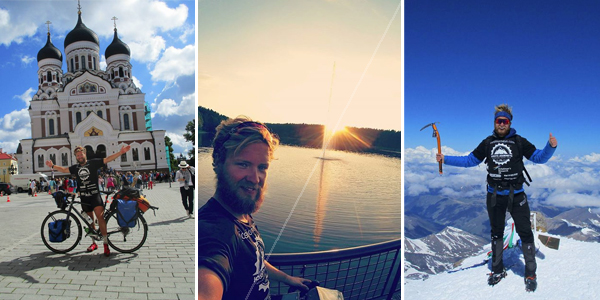 Jossâ€™ photos from his trip (l-r): In Tallinn, Lithuania and on Mount Elbrus

Although Joss is enjoying the challenge, it hasnâ€™t all been plain sailing.

â€œTemperatures have varied hugely â€“ back in March, I woke up every morning to a frozen tent. However some days in Russia were pushing 40Â°C. It can be hard to find water in remote areas so I was carrying 10 litres on my back on particularly scorching days.

â€œThe most difficult thing about the challenge is the unknown. I have a thorough plan but things often have to change and you need to be flexible. Iâ€™ve had to completely change my route at times. Luckily Iâ€™ve met some incredibly kind and helpful people while on my journey. People have been really generous, offering me food, water and shelter, and insisting that I take it!â€

Why is JossÂ doing it?

â€œMy family has been affected by Alzheimerâ€™s disease and having learned more about it, Iâ€™ve come to realise the vital need to find a cure, or at least a way to alleviate the devastating consequences of the condition. Thatâ€™s why Iâ€™m supporting Alzheimerâ€™s Research UK with this challenge.

â€œThe reaction to my journey has been amazing and people have been really generous in donating to the cause. Thatâ€™s a huge motivation and really spurs me on when Iâ€™m out on the road.â€ 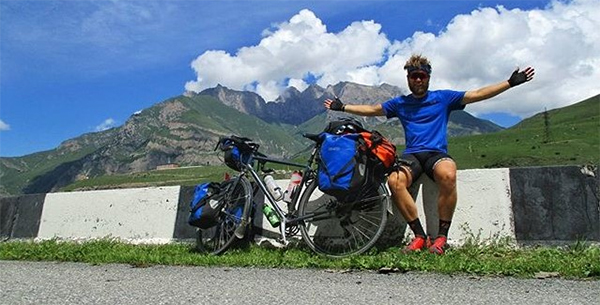 Joss aimed to raise Â£1,000 for Alzheimerâ€™s Research UK and has already surpassed this target five months into his challenge. Heâ€™s now upped his goal to Â£3,000. You can sponsor him on JustGiving.